SNP leader Nicola Sturgeon has insisted she would not attempt to stage a “wildcat” referendum on Scottish independence if her party wins a majority at the Holyrood election.

Scottish Conservative leader Douglas Ross claimed Ms Sturgeon was ready and willing to hold an “illegal” referendum if Boris Johnson refused to agree to another vote on separation.

Scotland’s first minister accused her Tory rival of “smears and mistruths” about her plans, as the pair clashed over the issue on Tuesday’s night BBC election debate.

“I would not countenance an illegal referendum – not least because it would not deliver independence,” Ms Sturgeon during the TV debate.

She added: “I will be responsible about that and I will build, and ultimately I think win, the case for independence through patient persuasion of people across the country.” 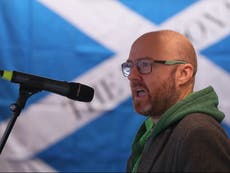 Scottish Greens set to help form pro-independence ‘supermajority’, poll finds2021 elections: Why is there a by-election in Hartlepool?India’s foreign minister ‘exposed to possible Covid cases’ after G7 meetings in London

Mr Ross claimed the SNP leader would demand the prime minister grants a section 30 order ((a provision in the Scotland Act of 1998) so the Scottish government can legally stage a so-called “indyref2” vote.

The Tory leader predicted Ms Sturgeon would “go ahead with an illegal wildcat referendum” when Mr Johnson’s refuses the request after the election.

“I know Douglas that your campaign has perhaps not been the most successful campaign, but don’t start to issue smears and just tell untruths about my position and what I’ve said,” the SNP leader fired back.

Ms Sturgeon’s has previously pledged to stage a “legal” referendum by the end of 2023. But some SNP politicians have struggled to stay completely on message.

SNP MP Richard Thomson last month claimed that Ms Sturgeon’s government would “simply go ahead with a referendum” if Downing Street refused to agree to one. He argued that the powers of the Scotland Act of 1998 would allow a “consultative” referendum to take place.

Any attempt to stage a “consultative” referendum on Scottish independence, without a section 30 order agreement, would likely spark a legal challenge from the UK government.

“I do not support a referendum,” he said. “I don’t support independence and I want people to choose something different. I want them to choose us to focus on a national recovery in the next parliament.”

The SNP looks set to win a slim majority at Thursday’s Holyrood election, according to the latest polls by YouGov, Survation and Opinium.

YouGov also found support for independence slipping among Scottish voters. Some 55 per cent support for remaining part of the UK, while backing for a breakaway is down at 45 per cent. The Survation survey found a 52-48 split in favour of the union.

Jerusalem protests – latest: 24 killed in Gaza and 700 injured in clashes, as UK condemns attack on Israel

Facebook Board’s Decision On Trump Ban Could Have Wider Impacts