Loved ones of Andrew Brown Jr., the 42-year-old Black man killed by police in North Carolina, gathered Monday at his funeral to mourn his death and call for justice.

Elizabeth City police officers shot Brown five times, including in the back of the head, while he was in his car outside his home on April 21 as they tried to execute a search warrant. The shooting occurred just one day after former Minneapolis police officer Derek Chauvin was sentenced to prison for the murder of George Floyd.

Several of Brown’s family members also spoke at the funeral, including one of his sons, Jha’rod Ferebee, who said he and his dad were best friends.

Elton Ferebee said Brown was the “coolest cousin” and a funny guy. About two months ago, Elton recalled, he got a pedicure at his girlfriend’s urging and had been feeling a bit self-conscious — until he saw how Brown responded.

Body camera footage of Brown’s killing has not been released; a North Carolina judge has ruled against doing so, claiming it could compromise the investigation.

But Brown’s family and legal team have viewed 20 seconds of the footage and said it shows him complying with police orders with his hands visibly on the steering wheel.

At the funeral, Crump called for the video to be released, joining a chorus of protesters and officials who have pushed for the footage to be made public.

Rev. Al Sharpton delivered a eulogy, calling for the officers who killed Brown to be held accountable as well as for sweeping change to the US criminal justice system to address systemic racism.

“This must stop. Enough is enough,” Sharpton said. “How many funerals do we have to have before we tell the Congress and the Senate that you’ve got to do something in these times?”

The Brown family was joined at the funeral by relatives of several other Black men killed by police, including loved ones of George Floyd and Daunte Wright.

“I feel the pain that this family is feeling,” said Floyd’s sister, Bridgett Floyd. “No matter the way it went, it was wrong. Sleepless nights, long days, heartache, and pain.”

Her brother, Terrence Floyd, vowed that they would be there for the Brown family, even when attention to the case dies down.

“It’s a shame in America that us as Black men, we gotta duck and dodge death when it’s not even looking at us,” he said. “I just want to let you all know, man, we’re there for you — we’re connected.” 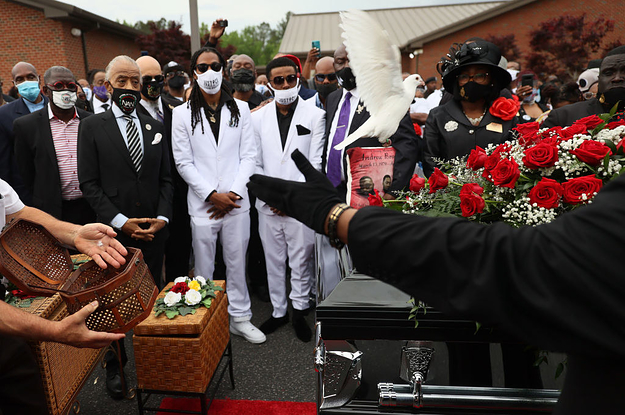 2021 budget to see big spending for aged care and infrastructure

US Teens Can Get Their Covid Shot. What’s Next for Schools?

Pete Davidson And Phoebe Dynevor Have Been Wearing Matching “PD” Necklaces After He Seemingly...

The sexiest Oscars dresses of all time

The DOJ Will Waive The Death Penalty For The American Who...