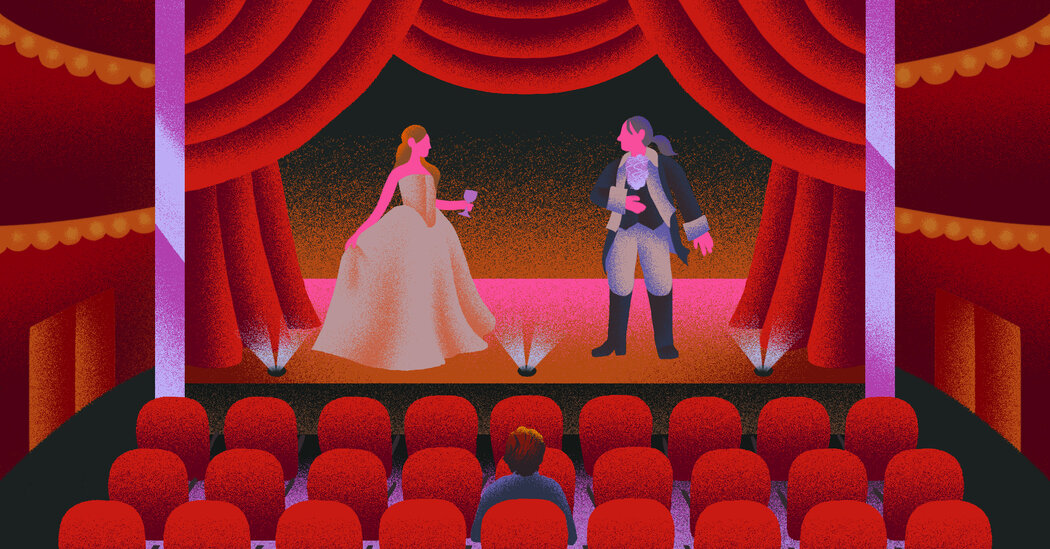 I have never lived in either London or New York, and thus have next to no experience with the hotbeds of English-speaking theater. Though I frequently travel to those cities, and social media posts of friends with their Broadway Playbills tantalize me, I live with an illness that makes it difficult to remain upright. That makes theater a tough experience: The first time I saw “Hamilton,” after I left the Richard Rodgers Theater I was too sick to remember most of what had happened. It was only through luck that I was well enough to see the musical a second time while on book tour, as well as Andrew Scott’s award-winning London performance in “Present Laughter.” Each was exhilarating, but I was always painfully aware of my body. On other occasions, a sudden flare of symptoms could force me to leave or to forfeit a pricey ticket on the week of a performance.

When the pandemic forced the theater world into survival mode last spring, theaters had to figure out how to produce shows for homebound audiences. The Old Vic, where I saw “Present Laughter” the year before, featured Covid-friendly plays in which one actor, or two socially distanced actors, performed for the cameras. I watched “Three Kings” and “Lungs” while in bed — a disability-friendly arrangement — and was able to view the stage from different perspectives thanks to those cameras. Though “Three Kings” and “Present Laughter” each star Andrew Scott, the cameras’ close-ups showed off his face in a way that I was unable to witness from the cheap seats. I saw the dangerous curl of his smirk as he transformed from an innocent child to his drunken, miserable father, without adjusting his makeup or costume. I was able to admire that all the more in spotting the details that streaming theater illuminated.

Spurred on by the Playbill newsletter, I became obsessed with watching as much theater as possible under these new, more accessible conditions. I saw plays and readings in which the actors recorded themselves at home, using Zoom and Skype, technology that has often been associated with remote work and learning. Many people have become allergic to Zoom as a result of overuse, but as a tool, Zoom and its ilk are able to control what the viewer sees in a way different from typical stagecraft. When streaming Will Arbery’s play about conservative Catholicism, “Heroes of the Fourth Turning,” a Pulitzer finalist, I am allowed an intimacy with the characters that even able-bodied, front-row ticket holders would not ordinarily be able to witness, as the performers come in and out of darkened Zoom squares from their apartments. When Justin says, “I just think proximity to L.G.B.T. is a threat to Christian children and families,” his face is lit in part by a dangerous light that isn’t simply the glow of my laptop screen. Every microexpression and ounce of fidgety wariness that his friend Kevin expresses in turn (“But why can’t we meet it, engage with it — ”) is up close as well. They aren’t in each other’s spaces, but over Zoom, they are in mine. Each square’s unique lighting conceals their apartments, emphasizing the actors; I might as well be with them in the wooded darkness.

Zoom and its ilk are able to control what the viewer sees in a way different from typical stagecraft.

Acting “at” a screen exposes the idiosyncrasies involved in at-home performance: Oscar Isaac and Marisa Tomei arguing while readjusting their AirPods in “Beirut”; Jesse Eisenberg drinking from a glass of green juice, his character aggravating everyone around him in “The Spoils,” which he wrote. These moments remind me that the actors involved, who can otherwise feel Hollywood-larger-than-life, aren’t exempt from muddling through our international tragedy. Some of my favorite moments from these performances were immediately before and after the actual readings, when the actors were so clearly themselves. Eisenberg gave a self-effacing description of the play at the start — making it all the more exhilarating to see him enter its first scene shouting bombastic profanity.

Not all streaming theater has been over Zoom or Skype. London’s National Theater made use of its archival recordings to create National Theater at Home, where, for a fee, viewers can stream “Cat on a Hot Tin Roof,” “The Cherry Orchard” and other renowned plays on demand. I became captivated by the professionally shot recording of “Angels in America,” which I’ve repeatedly rewatched — a story of a plague, viewed during another plague. “Proshot recordings,” which are filmed during a play’s standard run, mimic the typical theatergoing experience. While I am grateful for the chance to watch full-fledged performances, with sets and all, plays seen this way feel less immediate than the readings that have, by necessity, seized upon a new medium.

Before 2020, I had never before thought to explore theater beyond one or two plays, considering it a luxury for those more able-bodied or in certain cities. Watching plays on a computer screen isn’t a traditional experience, but it gives access to a type of storytelling for thousands who may never be able to enjoy it otherwise. Our theater houses will open again, and I’ve vowed to take advantage of opportunities to visit them when the time comes. I admit, though, that I will miss the versions that I’ve been able to see at home — versions that will very likely be lost when the world reopens and the desire to be shoulder to shoulder sends theatergoers back to Broadway again.

Esmé Weijun Wang is a novelist and an essayist whose books include the New York Times best-selling essay collection “The Collected Schizophrenias.”

Former subpostmasters expected to have names cleared after court appeal

My Boyfriend Has Two Girlfriends. Should I Be His Third?

Yankees finally have something to feel good about

Yankees Finally Look Like the Yankees in Win Over Cleveland

Cops: Man kills 11-yo daughter, then himself

Vaccines Are Effective Against the New York Variant, Studies Find

‘No family in history got this far’: George Floyd’s family reacts as Derek Chauvin...